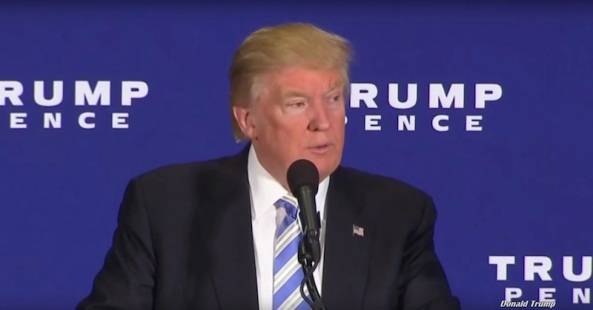 Trump outlined his ten-point plan to “Make America Great Again.” He called it a contract between himself and the American people. Here are some of the acts he would implement within the first 100 days of his administration:

Trump made a point of saying he would not approve the Time Warner-AT&T merger deal, arguing it would be too much consolidation in an already limited media market.

Trump also said he would cancel “every unconstitutional executive action, memorandum and order issued by Barack Obama, cancel funding for sanctuary cities, remove all of the more than 2 million criminal illegal immigrants from the country. “These are our drug dealers, gang heads, gang members, killers, and cancel visas to foreign countries that won’t take them back.”

……can’t understand why the media is trying so hard to destroy Trump with their biased reporting…..

John Brennan, current head of the CIA, converted to Islam while stationed in Saudi Arabia. John Brennan took his oath on a copy of the Constitution, not a Bible.

Obama’s top advisor, Valerie Jarrett, is a Muslim who was born in Iran where her parents still live.

Hillary Clinton’s top advisor, Huma Abedin, is a Muslim, whose mother and brother are involved in the now outlawed Muslim Brotherhood in Egypt.

Assistant Secretary for Policy Development for Homeland Security, Arif Aikhan, is a Muslim.

Obama advisor and founder of the Muslim Public Affairs Council, Salam al-Marayati, is a Muslim.

Obama’s Sharia Czar, Imam Mohamed Magid, of the Islamic Society of North America, is a Muslim.

Congressman Keith Ellison took his oath on a copy of the Qur’an.

Look up the names Arif Alikhan, Mohammed Elibiary, Rashad Hussain, Salam al-Marayati, Imam Mohamed Magid, Eboo Patel. All these and more are working with the Obama administration with links to Muslim Brotherhood and Islamist activists.
Considering all these appointments, it would explain why Obama and his minions are systematically destroying our nation, supporting radical Muslim groups worldwide, opening our southern border, and turning a blind eye to the genocide being perpetrated on Christians all over Africa and the Middle East.

Congresswoman Michele Bachman was almost tarred and feathered by Democrats when she voiced her concern about Muslims taking over our government. Our nation and our government has been infiltrated by people who want to destroy us. It WILL only get worse. Do you wonder why there is concern?

The mainstream media is a sham!
People need to know why it’s a sham!

He doesn’t drink wine, he has a tendency to lie, he has a weakness for women and his hair is sort of a big deal. No, I’m not talking about Donald Trump. I’m referring to Samson, G…

Source: Chosen by God: The Man Who Ate Honey, but Pulled Down Pillars

Understanding the Threat, by John  Guandolo, October 6, 2016: The Organisation of Islamic Cooperation (OIC) is the largest voting bloc in the United Nations (UN), and is comprised of all Islamic St…

Source: Hillary Clinton officially on record as supporting the implementation of sharia over the Constitution

Vremea / The Weather in Phoenix Copyright © Rules: All content in this blog created by me can be stored on any retrieval system, reproduced, reposted, displayed, transmitted in any form, electronic or otherwise, with the condition that content quoted or reposted to have a link back to the source page on this blog and, if the excerpt contains a quotation (or full post) from another site, a link to the original source. Disclaimer: I am the author of this blog and the thoughts, opinions and viewpoints are mine. I do not represent any governmental, religious or private agency or group, nor do I presume to be the supreme source of all knowledge in the world. Sometimes I am wrong. You may disagree with what I write. Or explain to me in a comment why I am wrong. I make mistakes. Feel free to correct me when I do.