I give my full and complete endorsement to Jesus Christ. My 100% trust is in God alone, our Sovereign King. I agree with the late Adrian Rogers, who said,

Source: Spiritual Leaders and Their Influence in This Election Season 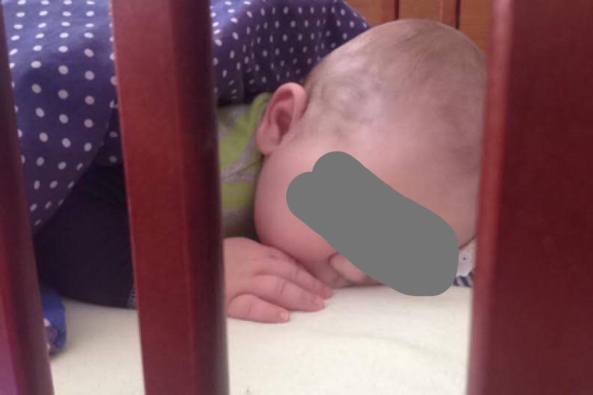 Five police officers along with a social worker from Barnevernet stormed Margaret Hennum’s house. In true 1930’s Nazi style, they took Caspian, the above sleeping infant from his crib. In fact, this picture is taken not long before the kidnapping.

Context: Margaret is a neonatal intensive care nurse working in Norway and she has been housing Nadia and her infant son Caspian for the past month. Nadia has been discharged from a Mother’s Home in Norway about a month ago and she has been housed by Margaret’s family since then. Their story was published anonymously by Chris Reimers here. They are no longer anonymous. They are desperate after what they experienced today.

While Nadia was at an appointment, Barnevernet backed by police showed up and snatched the baby under the pretext that the baby does not have identification. Just like that. There was nothing Margaret with her credentials could do.

On Tuesday Donald Trump closed the door on the Republican nomination for President by winning all five of the remaining primaries — New Jersey, South Dakota, Montana, New Mexico and California. Trump won the last 16 Republican contests.

TRUMP HAS 1,536 DELEGATES AND COUNTING.

REMEMBER WHEN EVERYONE SAID TRUMP WOULDN’T GET THE NOMINATION?

Trump received 13,406,108 votes to date in the elections according to www.thegreenpapers.com.

As a result Trump has more votes than any candidate in Republican history.

TRUMP SHATTERED THE PREVIOUS RECORD BY 1.4 MILLION VOTES — AND THAT WAS WITH 17 CANDIDATES IN THE RACE

George W. Bush had 12 million votes in 2000.  The Republican Party also set a party record this year in pre-convention state election turnout with over 28 million votes to date which is 139% of the record high voter turnout in 2008.  This increase in votes can be attributed to Donald Trump.

TRUMP MAY ALSO BE THE FIRST CANDIDATE IN THE MODERN ERA TO HAVE FUNDED HIS CAMPAIGN BY HIMSELF DURING THE PRIMARY SEASON.

Trump’s accomplishments will now go down in history. On the Democratic side, Hillary Clinton pulled out the win with more delegates than socialist Sanders. However, nearly a quarter of her delegates came from controversial ‘super delegates’. Her road to the Democratic nomination was far less impressive and may also go down in history because she may be under indictment before the November election.

Vremea / The Weather in Phoenix

Copyright © Rules: All content in this blog created by me can be stored on any retrieval system, reproduced, reposted, displayed, transmitted in any form, electronic or otherwise, with the condition that content quoted or reposted to have a link back to the source page on this blog and, if the excerpt contains a quotation (or full post) from another site, a link to the original source. Disclaimer: I am the author of this blog and the thoughts, opinions and viewpoints are mine. I do not represent any governmental, religious or private agency or group, nor do I presume to be the supreme source of all knowledge in the world. Sometimes I am wrong. You may disagree with what I write. Or explain to me in a comment why I am wrong. I make mistakes. Feel free to correct me when I do.